03rd July 2019 | Dan Trudgian
Touring in a Caravan or a motorhome is a fantastic way to enjoy a holiday with a furry companion. 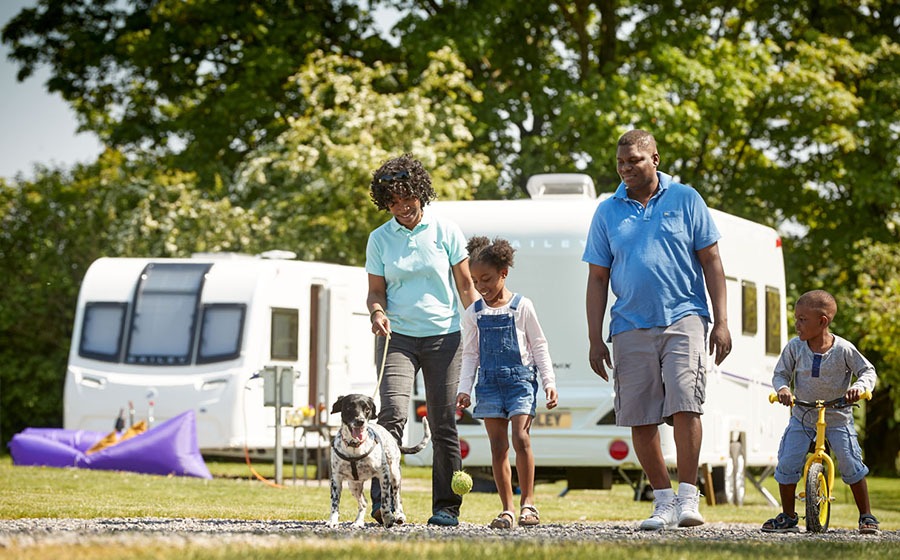 Most of the UK campsites are pet friendly and offer facilities tailored to make their holiday just as enjoyable as ours.

But what can we do to make sure our pets are both safe and stress free when on holiday? In this article I will explore some tips that we have learnt from taking our Labrador, and believe it or not even our cat on holiday in the caravan.

Remember that it is now Law in the UK that dogs and other traveling animals are suitably restrained in the vehicle. We use a short lead that clips into a seat belt on one end and onto the dog collar at the other. They are inexpensive and widely available from Pet stores.

When travelling with a dog make sure you travel with a water bowl, some water and stop frequently. We aim for a stop every 2 ½ hours and aim for the nearest services. Ideally, we only need to stop once maybe twice per trip, it’s good to stop at a designated services and allow the dog to stretch their legs and have a comfort break too.

Once you arrive on site, you will want to set up the caravan or motorhome. This is a good time to get the dog lead set up also. We have a long (non-extendable) lead that we loop around the jockey wheel. Its long enough to allow the dog in the awning, the caravan and to walk around outside too. Wrapping it around the jockey wheel means no need for extra lead anchor points in the pitch, which is handy if you are staying on a hard pitch surface.

When on site there are just a few rules of etiquette, that are no different to keeping a dog at home. Try to keep barking to a minimum, make sure you always clean up any mess and try to encourage the dog to “go” in a designated dog exercise area. These areas allow you to take the dog off the lead as keeping a dog on lead throughout the rest of the campsite will be required. 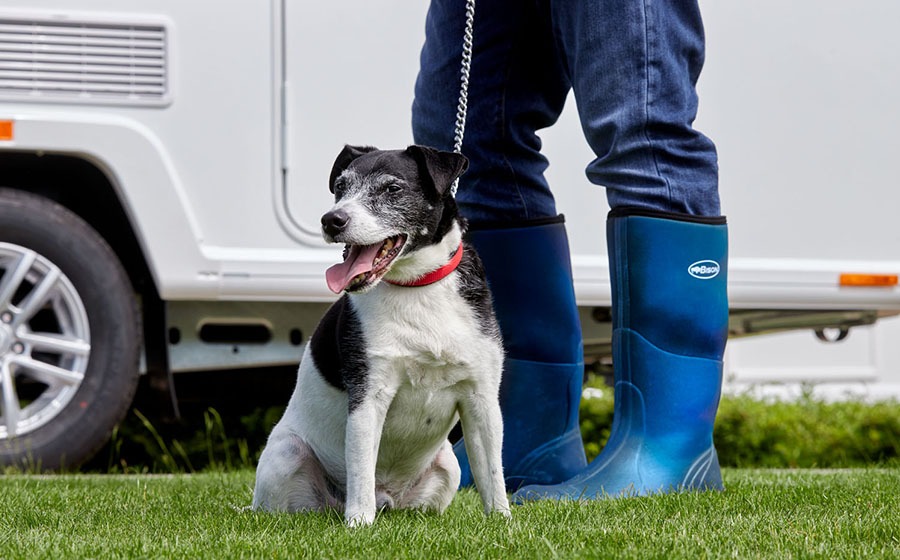 A top tip for feeding your dog, especially if the dog eats dry food is to create separate meal packs. We use sandwich bags to hold each meal. This method of keeping separate meals means we only need to take the exact amount of food for the dog. We prepare these meal bags before we head off and store them away in the caravan.

Bringing your dog on holiday means you spend a lot of time together and it really is advised not to leave a dog unattended in the caravan for long periods. There will be times that you will need to leave him behind however, either when going to the shops, using the on-site facilities or for other short-term periods. In these instances, use some common sense.

If it’s a warm day, just don’t leave them alone. A caravan will become quite warm on a mild day, even with skylights open and windows drawn closed, the caravan will heat up. Also, if your dog gets easily distressed, keeping a dog alone in a caravan with unfamiliar surroundings and smells can cause a dog to bark and become quite anxious.

However, as a point of reference, we do leave our Labrador alone when we need to visit the supermarket or when we are taking showers. In those instances that are for less than an hour, we close the blinds, put the radio on and make sure he has his bowl of water and is settled. I guarantee he will still be asleep with the cat when we return. 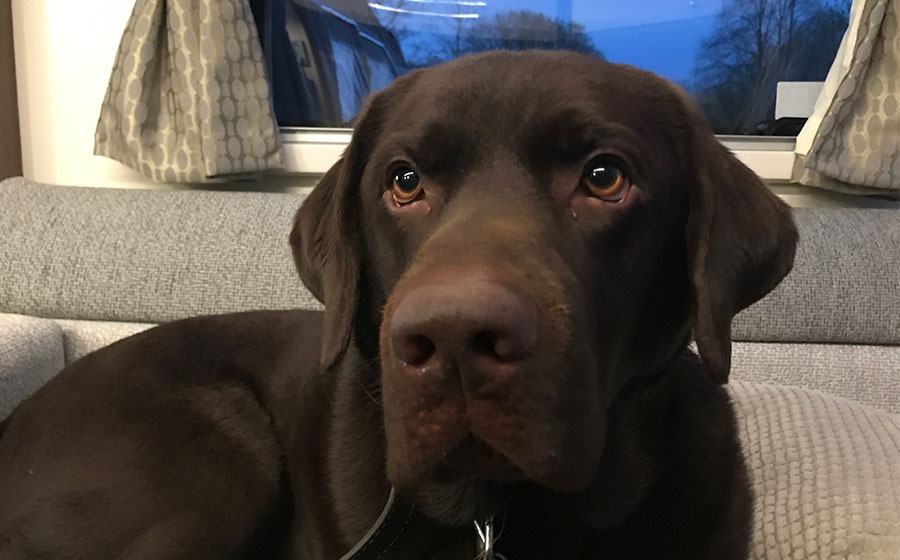 We discovered purely by accident that taking the cat in the caravan was feasible. We were badly let down by our cattery for one of our trips last year, so we decided to take him with us. After all we were not away for long nor were we far away from home. We applied some common sense prior to us setting off and now we don’t hesitate in taking Smudge with us.

Unlike most dogs, cats can be easily scared and can often suffer from anxiety, they don’t like change. So, with that in mind there are a few tips to make the cat feel at home in the caravan.

The worst thing a cat will endure when touring is the journey. Up to this point our cat had only been in the car in a carry box to and from the vets, so, getting him familiar and relaxed with the car was our very first step.

We sat in the car with him on our drive, with the engine off and no radio, allowing him to roam free and sniff out the interior. At first, he was timid but after a couple of hours he wondered around and was curious of his surroundings before settling down to sleep.

A few more attempts at this and soon he was quite relaxed to be in the car. The next step was to take short journeys and again make him feel relaxed. After just 3 days from no interaction to being driven to the park and back, he was fine. He didn’t go in the travel crate, instead he was tied into the seatbelt and sat securely on Chloe’s lap, where he rests and sleeps throughout all our car journeys.

Once he was happy in the car, the next obvious step was getting him familiar with the caravan. For us, that meant a few hours in the caravan whilst in storage. We had items that our cat likes including a blanket he loves to sleep on and a few toys he enjoys that have his scent on them. After a couple of hours, in the caravan again he was quite at home, finding “his” spot in the caravan and letting him do his thing.

In total it took 3 days and 6 trips in the car, two 3-hour sessions in the caravan for him to be completely happy in the surroundings. Smudge was a rescue kitten when we took him in. He had a traumatic start in life and we must reassure him, comfort him in everything he does. As such, he doesn’t like outdoors, he hates wide open spaces but enjoys looking out at them from behind a window. 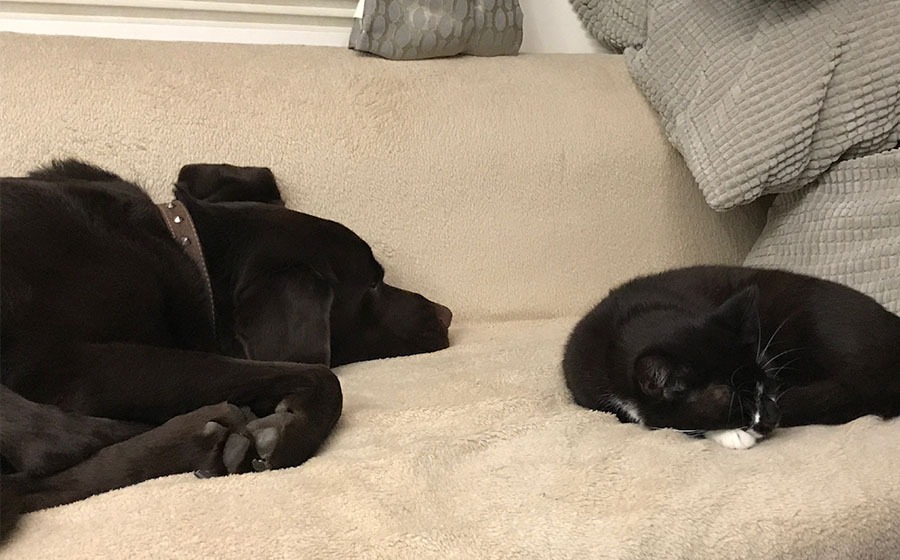 Once pitched up and settled, we set the kitty litter tray up in the shower. We use Silica non-clumping litter and find it is easy to clean up and is odour free. As for food, we have used the same principles as the dog and have measured out amounts suitable for each meal time. It’s easy to do and limits the amount of food we need to carry.

As discussed above with keeping the dog cool in warm weather, a good idea is to open windows and use fly screens to limit the bright sun. If you have blown air heating turn the setting to vent only, to create some circulation of air around the caravan.

Lastly, make sure you give the cat some space and let them do what they want to do (within reason) and you will find caravanning with a cat is far easier than you could imagine. Of course, this is our experience and your own cat may respond differently and it may not be possible, you will have to use your own judgement if taking the cat is possible. 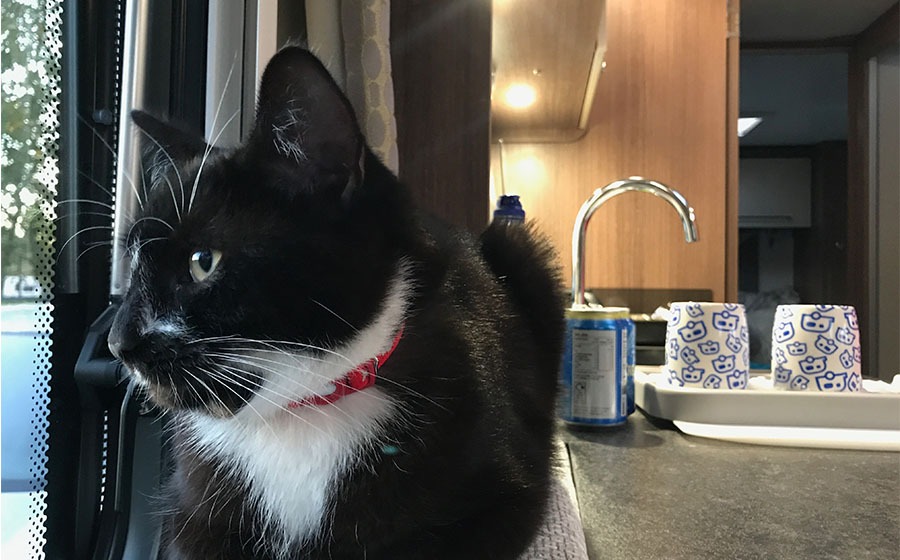 I’ve only mentioned cats and dogs, but of course there is no limit to what pet you could take, although the goldfish might be a bit of a stretch, we have seen some different pets over the years including rabbits, lizards and on one occasion even a bird of prey. I have laid out some tips and reassurances above, based purely on our experience with our pets. 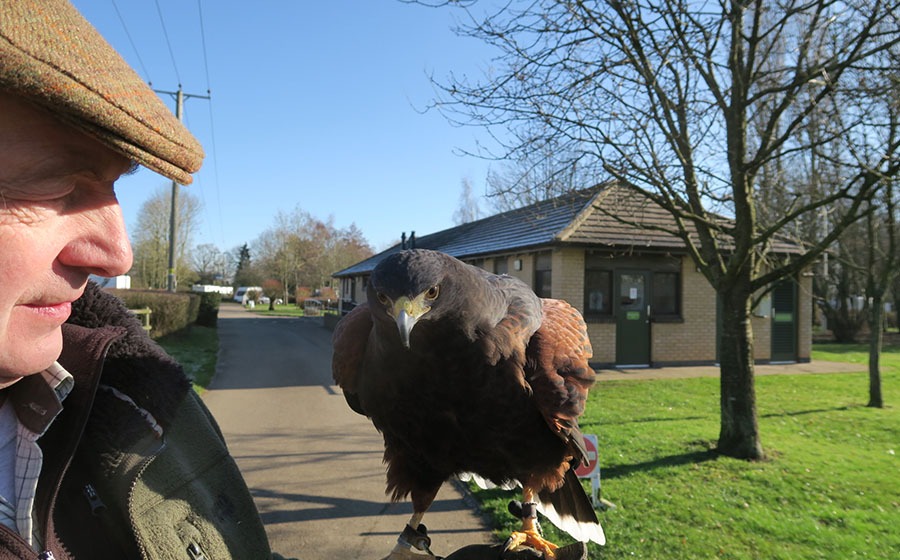 You will know your pet better than anyone. You will understand what they need and how they behave in specific situations. If you want some extra information and from somebody qualified to know more about pets, travel and holidays, speak to your local vet for advice and tips. 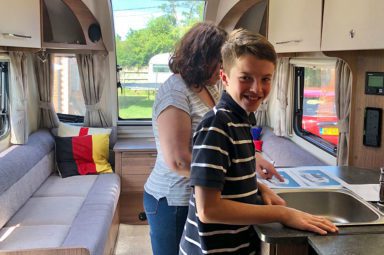 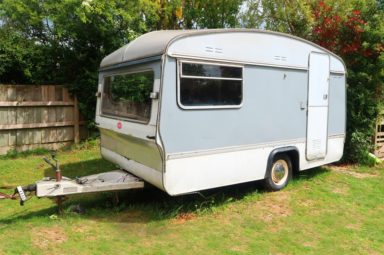 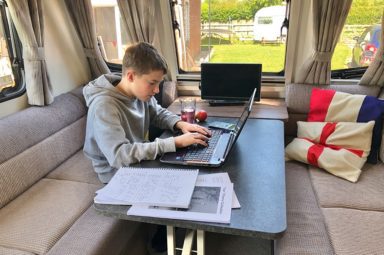 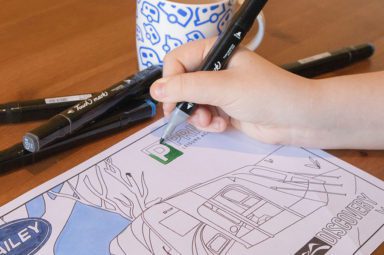