Journey to ‘The End of the World’ – one year on

12th March 2021 | Lee Davey
This time last year, we’d reached ‘The End of the World’ with a pair of Bailey Discovery D4-4’s. Towed by SsangYong cars, we were in southwest Portugal, threading through a rocky maze to perch upon a cliff top. ‘Command vehicle’ for the trip was a Bailey Alliance 76-4T motorhome, which joined the caravans for a sunset photo by the lighthouse - a photo which was discussed many times during the planning phases and one which had to be captured in an ever-decreasing window of opportunity. 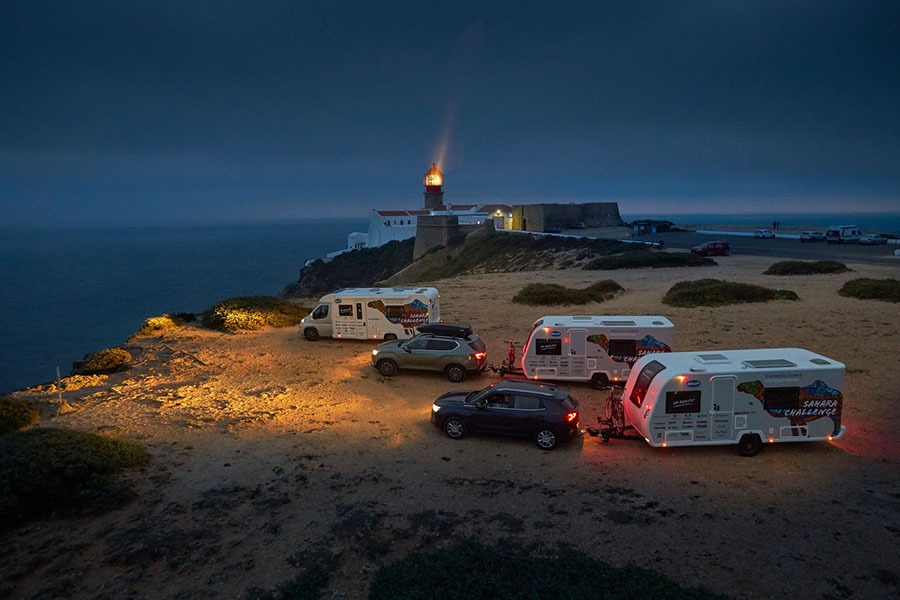 The Sahara Challenge team at Cabo de São Vicente, known as ‘The End of the World’

During the Arctic Adventure and Bristanbul trips, France was the first country crossed but with the Bilbao ferry an unknown for most of us – me included – we thought we’d skirt France’s coastline, arriving in Bilbao ready to see the sights and clock up some mileage. Before purchasing our first caravan, I’d covered many hire car miles along the east coast of Spain, although heading west with a Bailey Discovery D4-4 in tow would be another first.

Our first destination – the northern fringes of Bilbao – was a 30-minute hop from the port; a location that offered a surprising amount of on-street parking for two Discovery caravans and the Alliance 76-4T motorhome. Still feeling the Bay of Biscay beneath my feet, meandering beside the Bilbao Estuary with the Guggenheim Museum as a backdrop was a true taste of Spanish culture. Wrapped in a UK-spec winter wardrobe, the warmth from the sun was unexpected, as was the dry ice ‘fog’ that was pumped from the museum, giving this stunning building a 1980’s power ballad feel. 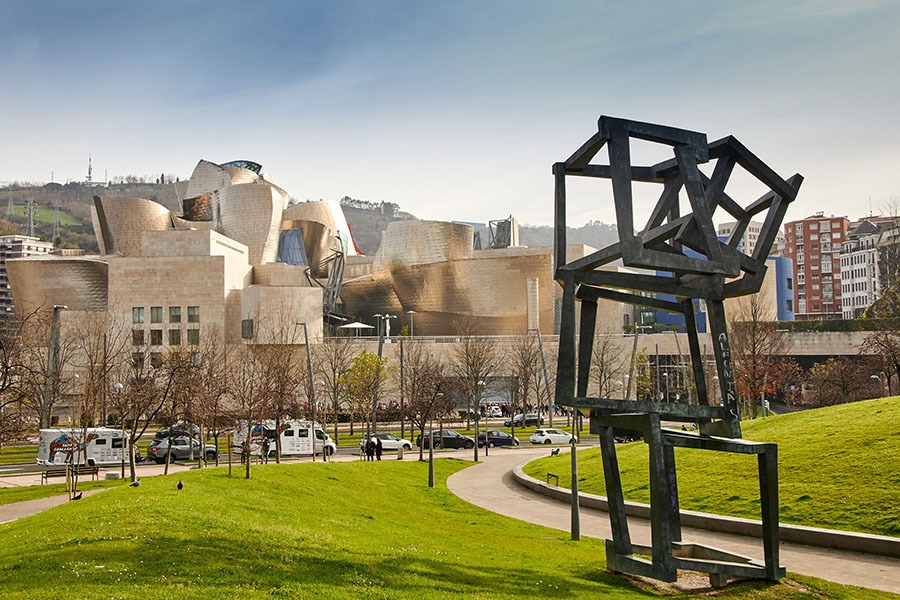 The Sahara Challenge team visit the Guggenheim Museum in Bilbao

Hugging Spain’s northern coast, the E-70 and A-8 gave glimpses of the sea to the right, with views of rugged landscape to the left, until we reached Camping Deva Gijon. The sun continued to shine as we pitched upon a terrace that overlooked the rest of the campsite, ready for our first night in the caravans and motorhome. Being out of season, the sites – and roads – weren’t unduly busy with the sort of temperatures we’d expect in Spring back in the UK. 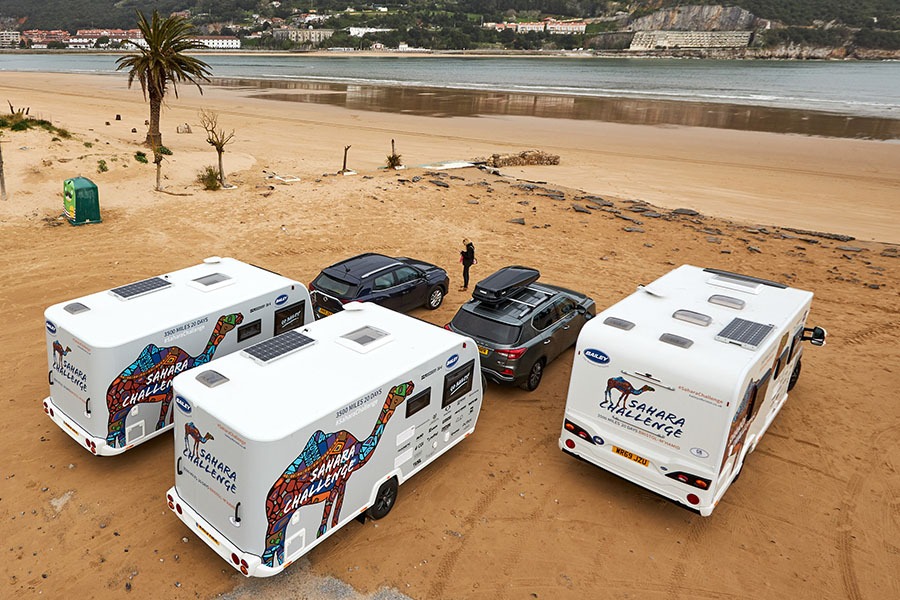 Unlike the Bristanbul trip, where we visited 21-countries in as many days, the Sahara Challenge was only scheduled to pass through four countries – Spain, Portugal, Morocco and, of course, England. With so few border crossings they became true milestone events with Portugal welcoming us with clear roads and more sunshine as we headed for Porto. Visiting Portugal was yet another first – caravanning, motorhoming or otherwise – and the 330-mile journey from Camping Deva Gijon to Porto allowed us to zig-zag through countryside that, apart from the stretch of tarmac ahead of us, hasn’t changed for many thousands of years. Various towns and cities dotted the route, each of which displaying a love of architecture, and the desire to assemble buildings as though playing Tetris. An overnight stop between the trees at Campismo Angereiras allowed us to venture into Porto itself (just 8km away) and enjoy a bite to eat at a city centre restaurant. 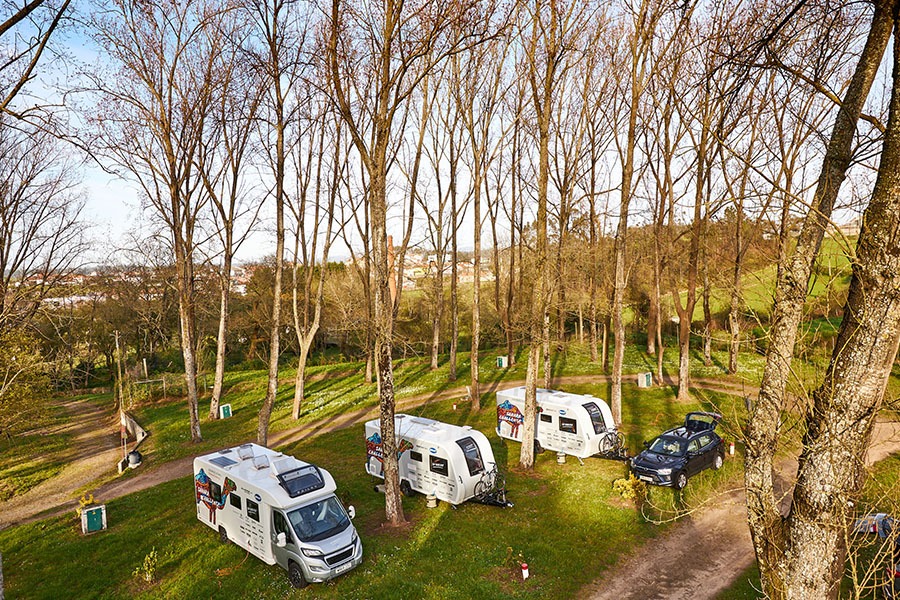 Reaching Sagres was always at the back of our minds, doubly so given the timeframe we had. When the Earth was thought to be flat, travellers would gaze across this vast expanse of ocean, convinced that journeying to the horizon would result in a fall of epic proportions. Fast forward hundreds of years and it’s still easy to see why Cabo de São Vicente was named ‘The End of the World’. Covering 375-miles to ‘bag’ a sunset shot, we squeezed between the rocks, jostling for photographic position as the sun began to fall faster than expected. Pointing our noses towards Morocco, a camera was fastened to a hurriedly extended telescopic pole – and the shot was captured before the sun fell from the sky. 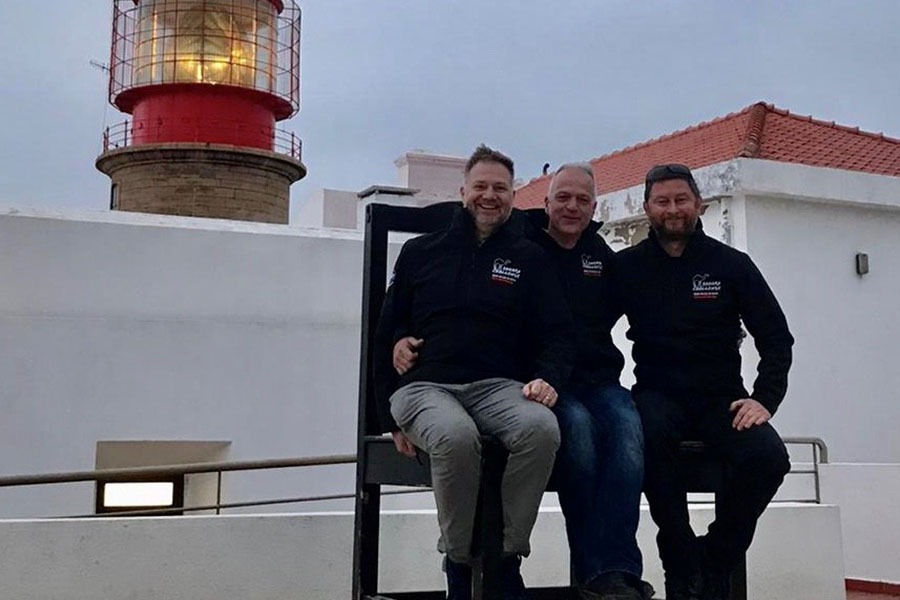 The team were briefly joined at 'The End of the World' by the Caravan and Motorhome Club Director General, Nick Lomas

Unfortunately, that was the closest we’d get to Morocco due to a rapidly changing travel landscape and the need to about-turn. The night before we were due to cross from Spain to Morocco, news of imminent border closures arrived and it became clear that, sadly, the trip couldn’t continue. Over a cup of tea in the motorhome, we decided to drop as many people as possible at Seville Airport with a skeleton crew of four heading for home with the vehicles. With bags being hurriedly wheeled into the departure lounge we headed north, planning ‘on the hoof’ via walkie-talkie and deciding how far we could travel that day.

With airports becoming clogged within hours, surface travel quickly became the easiest way to head for home, with The Caravan and Motorhome Club’s Red Pennant team coming to the rescue. After we’d chosen an approximate geographic location to aim for, The Caravan and Motorhome Club would assess availability and make the booking on our behalf. As we were covering the miles in Spain, ferry crossings were either clogged or cancelled meaning a Bilbao to Portsmouth escape wasn’t possible. We drew a line to Biarritz, which, ironically, meant we’d still cross four countries during this trip, even though Morocco wasn’t one of them. Military vehicles soon became a common sight and the closer we got to the French/Spanish border, the more barricade-laden camouflaged lorries hurtled past us. Twitter allowed us to keep in touch with folks who’d already crossed the border, and as we slipped through while the barricades were being unloaded, we could relay this information to caravanners and motorhomers behind us. 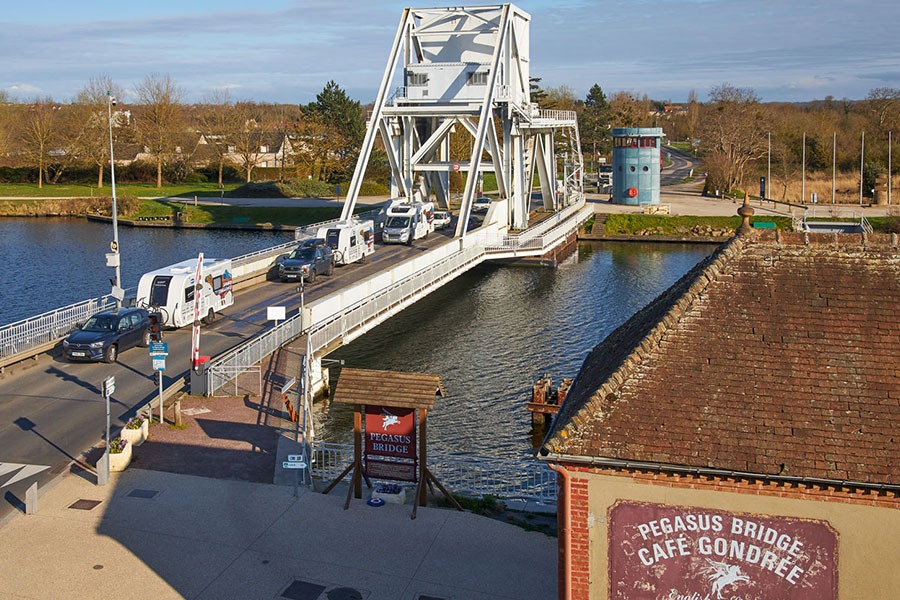 On the dash back to the UK, the core team passed over Pegasus Bridge

France was also in disarray with ferries along the Brittany and Normandy coastline being cancelled and campsites closing a matter of minutes after bookings were made. Again, Red Pennant came to the rescue and we stayed at eerily quiet campsites as we headed for Caen. As we pulled into the Ouistreham ferry port, a heavy police presence suggested a problem, but it soon became clear they were there to ensure an efficient boarding procedure for what could be the last ferry from this location. Back in the UK, plans were made to quarantine the vehicles at the Bailey factory. A large area had been cordoned off and as our dash from southern Spain came to a close, we parked the vehicles at a location others were forbidden to enter. We drew a collective sigh of relief and headed for home to our own quarantine period.

We came, we saw, but we didn’t manage to ‘conquer’ the Sahara Desert…this time. We did, however, have quite the adventure. 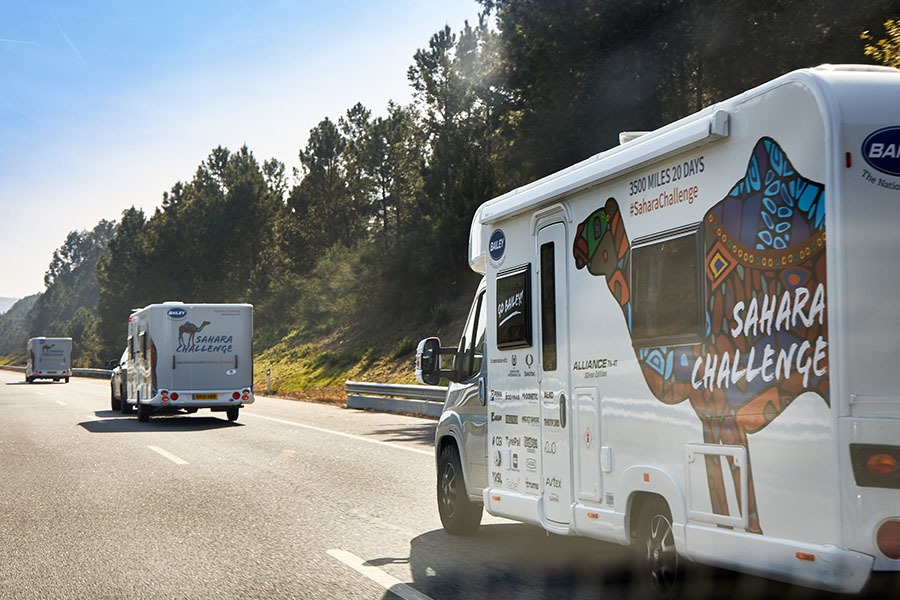 Why I love caravanning 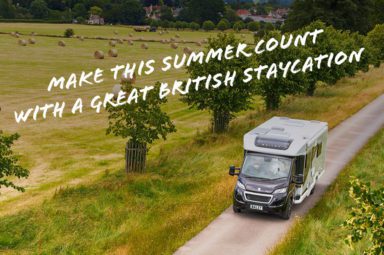 Make this Summer count with a Great British Staycation! 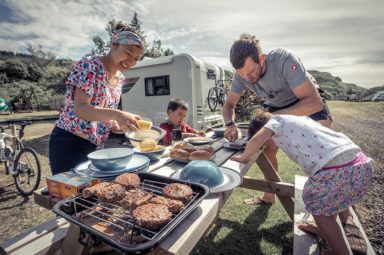 More than simply a lifestyle 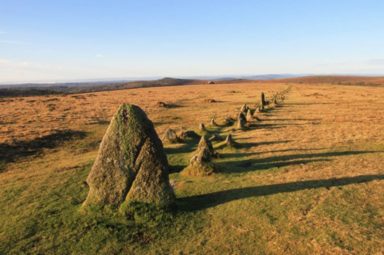 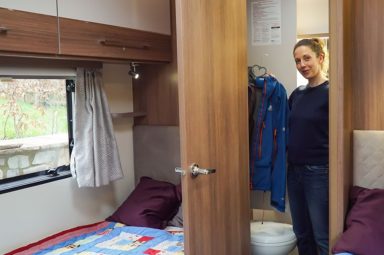 Packing our motorhome – part one 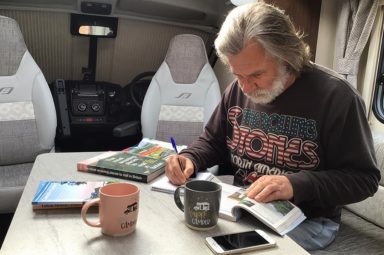 Richard and Sandra Fox – A lockdown planning for the adventures ahead