29th April 2022 | Lee Davey
In Part One of Building a Bailey, HR welcomed me to the Bailey family, and I was tasked with building a firm base for the rest of the caravan to sit upon. In Part Two, I go into Ikea overload. 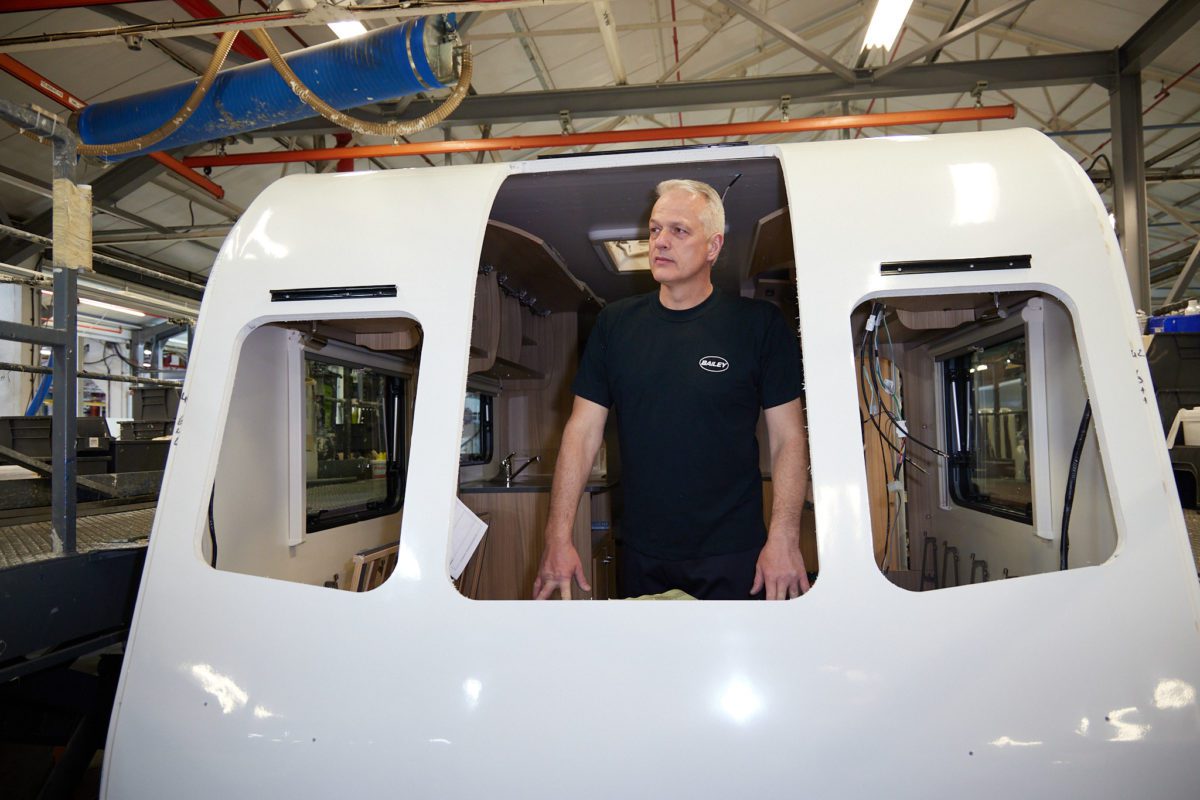 Furniture within a caravan undergoes a punishing regime, or it does in our caravan. Constant opening and closing test individual items, and as most units are at eye level when either sitting or standing, any misalignment is instantly noticeable. The chap who had the unenviable task of teaching me how to assemble a pre-cut, CNC machined above-bed storage locker has been making cabinets for 18-years. I, on the other hand, have built the occasional Billy Bookcase.

I wasn’t entirely thrown in the deep end, with my first attempt being the assembly of a basic panel that was held in place by a jig. All I had to do was drive screws in at the correct angle and depth, a task I somehow misjudged. I was pleased with my first attempt until the wood veneer was held aloft, and an unforgiving strip light revealed a series of tiny screw bulges. ‘We’ll put that safely over here’, he said. Kind words, although we both knew it was destined for the bin. 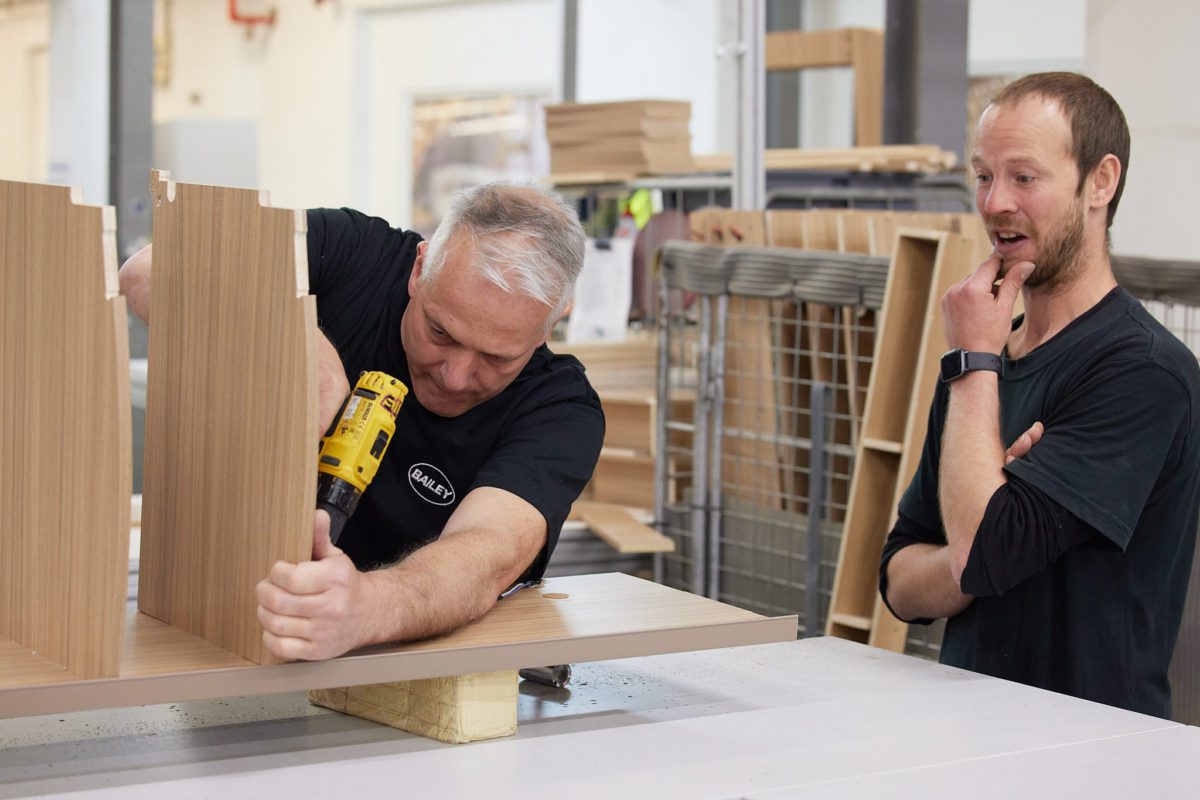 With the rookie mistake behind me, I then had 18-minutes to assemble an upper locker, although help was at hand to ensure that each part was the correct way up and screws of the right size were used. Retrieving pyjamas from an overhead locker gives little indication of the skill and preparation that goes into each piece of furniture, and I felt the pressure. I was in the zone and pleasantly surprised once finished. Time had little meaning once I’d knuckled down to cabinet making, although I was convinced my time must be somewhere in the ballpark. The timelapse camera should’ve given me a clue as it turned itself off after 30-minutes, and I continued for a further 6-minutes after that. Few things can replace experience, and this was underlined when the chap managed to build a cabinet and inspect it, instruct me, and still have time to spare.

Fitting the caravan’s outer shell after assembling interior fixtures and fittings makes sense. Instead of the team forming an ant-like queue to pass each component through the door, acres of space around internal parts make for an efficient workspace. In true Blue Peter style, I fitted an above-bed locker that had been made earlier, not the one that I had made, before the caravan shuffled further along the line. 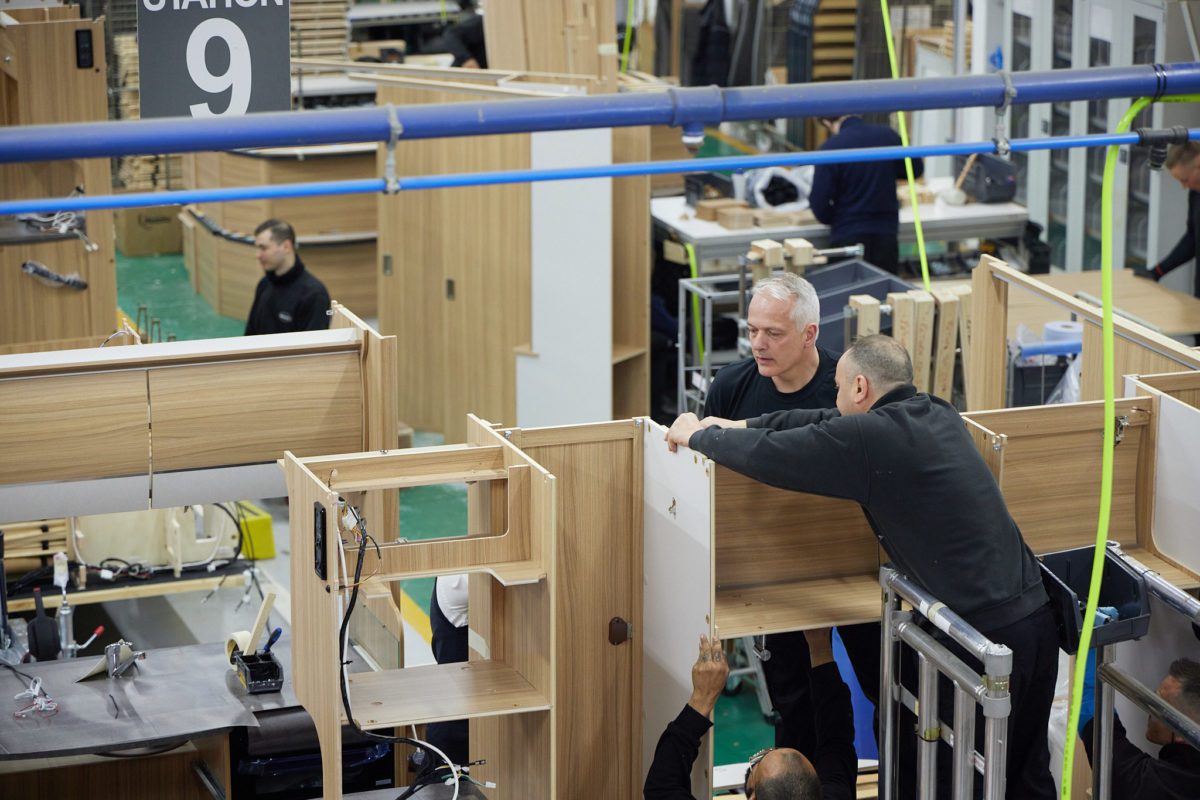 The outer shell is manufactured by Bailey and, for the Phoenix 644, comes in four pieces – the sides, back panel and roof/front panel. With my brand-new Bailey uniform having that first-day-of-school look, I was somewhat nervous when applying sealant between the floor and walls. A handling device then moved each side into position before it was secured to the floor. Another device lowered the roof into place, and as the outer Alu-Tech rails were added, I was tasked with securing the structure with nuts, bolts and butterfly clips. Again, each nut is torqued to the correct setting, with the roof strap being double-checked with a separate device.

The chap on this station was very chipper indeed, happily admitting that this particular workstation had saved him money thanks to the fine-tuning required when the roof is lowered and the yoga-like stretch needed for a few remote fasteners. With this workout rendering gym membership irrelevant, his monthly direct debit was cancelled. Even with the management team out of earshot, many of the factory team chatted candidly about clearly defined pay increases and the promise of a decent pension, with everyone eager to produce a product fit for the next workstation. I wasn’t expecting scenes reminiscent of British Leyland, but this productive, buoyant attitude surprised me a little, especially as employees are paid per hour and not per unit produced. 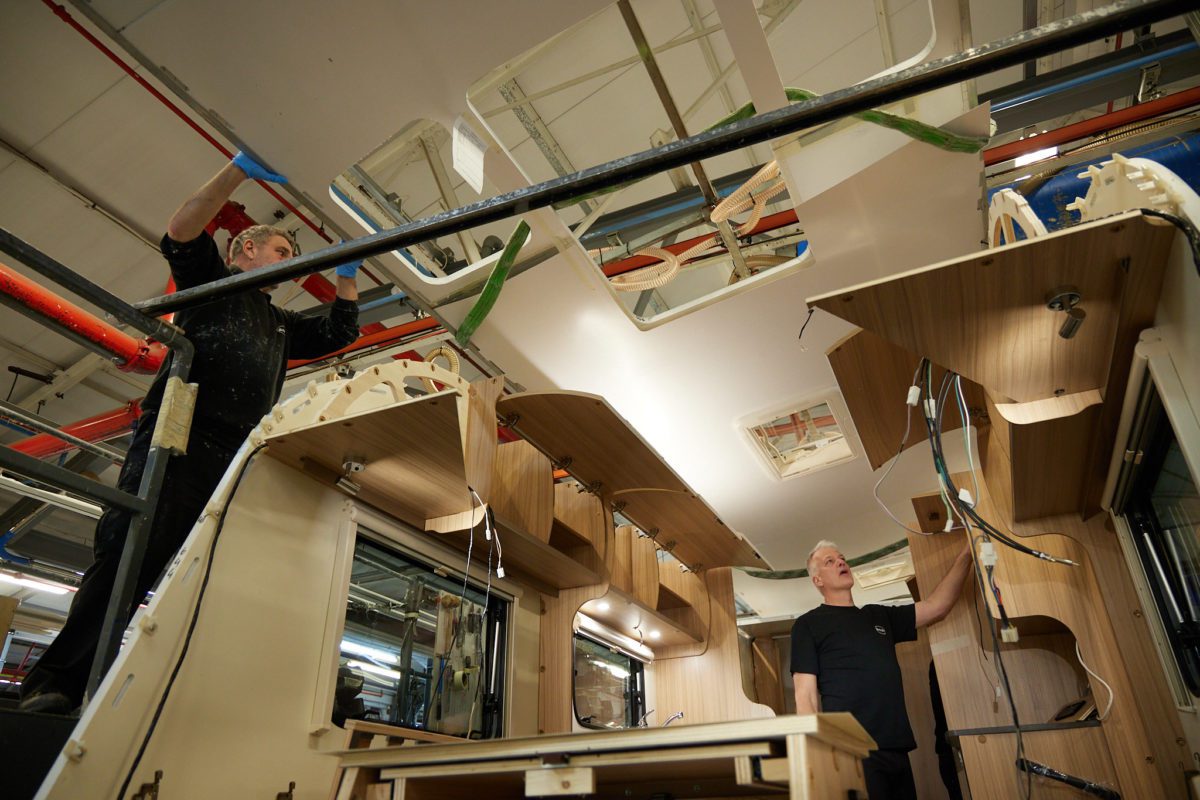 With the shell now making the caravan a recognizable item, it’s moved to the final line, where the checking and double-checking begins. Gas and electric checks are understandably stringent, and the chaps in charge of this station honed their routine to double-act status. Gas systems are pressurized with air and checked for loss, while every electric component – 240v and 12v – is scrutinized by a range of equipment that wouldn’t look out of place in an operating theatre. My role was somewhat limited; I did not wish to introduce ham-fistedness to these critical safety checks. As I was about to leave the station, the team detected resistance in the fridge’s 12v circuit. A fixer follows the caravans for the next few stations, doing precisely what his job title suggests. On this occasion, a connection was remade, and the electrical tester glowed green with approval.

I’ve never been good at applying graphics of any kind. Despite watching multiple YouTube videos, I still manage to trap air under the film, with the decal displaying all the texture of a 1980s Artex ceiling. The youthful appearance of the chap in charge belied his experience, and he set about the monumental task of teaching me how it’s done. Admittedly, I was given a more straightforward graphic, the ‘Phoenix’ logo that sits below the nearside front window, and with step-by-step instruction, I was over the moon with the result. However, someone had hatched a plan. 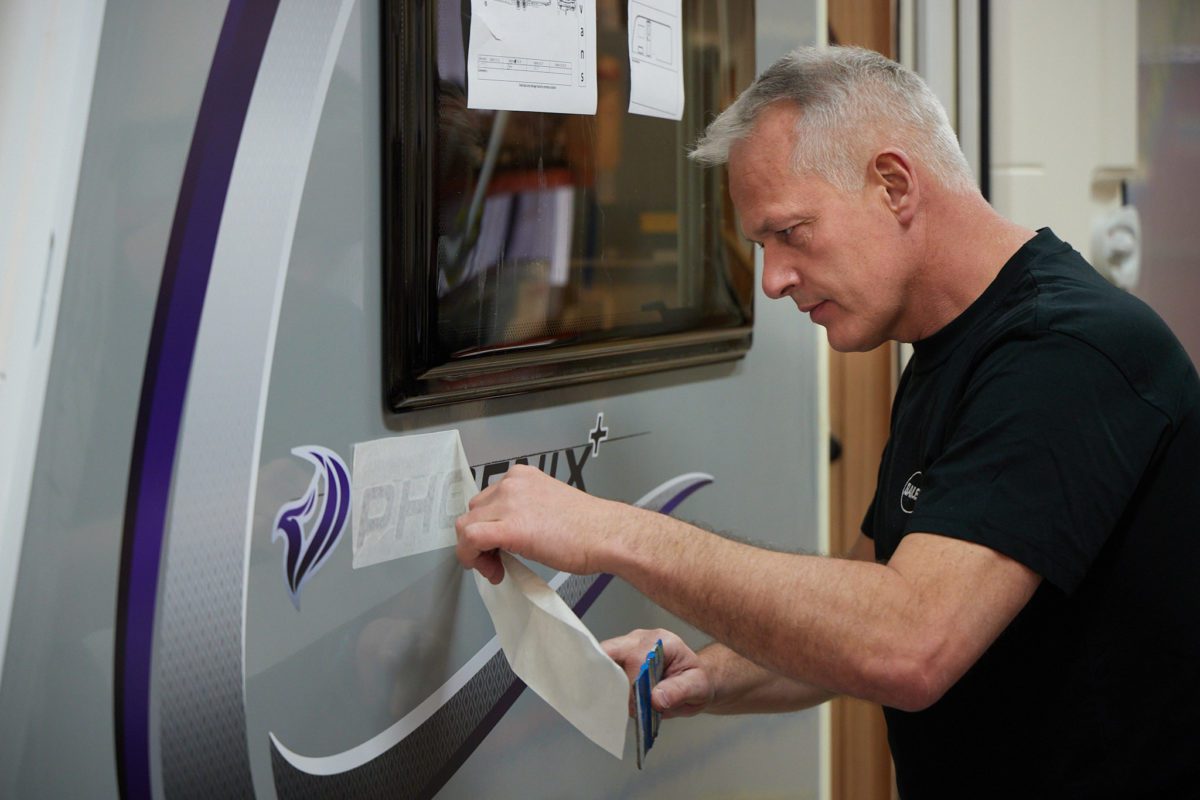 The final four stations are primarily aimed at quality control, with soft furnishings being added as the caravan nears the end of its factory tour. I’m fussy when ‘on the tools’ and when undertaking work of any kind, be it on motorcycles, cars or caravans, screws must face the same way, sealant beads must be of uniform width, and things have to line up. At the Quality Control Stations, I joined Dean, who I met on the Bristanbul tour, and was handed an alarmingly bright light. Looking directly at the light as I switched it on didn’t inspire Dean with confidence, but once the white splodge in the centre of my vision had cleared, we scoured every nook and cranny.

This caravan had already been checked, and if I spotted an issue – no matter how small – I found it had already been jotted down. One of the locker doors in the kitchen was 2mm proud and was already awaiting attention at the next station. I wasn’t sure if I was being picky when I found a hair-like wisp of sealant emerging from the foam coving and residue from a strip of masking tape, but both had already been noted on the QC form as requiring attention.

With one quality control station complete, we moved to the next, where we made our way around the caravan with more torches, ensuring the previously noted work had been rectified. I wasn’t sure what to expect, so I asked the team leader if this aspect had changed recently. I was told that Covid had reduced staff levels by almost a third last year, either through the ‘Pingdemic’ or employees who were already isolating, but with the production line back on an even keel, committing the final four stations to quality control had been key. 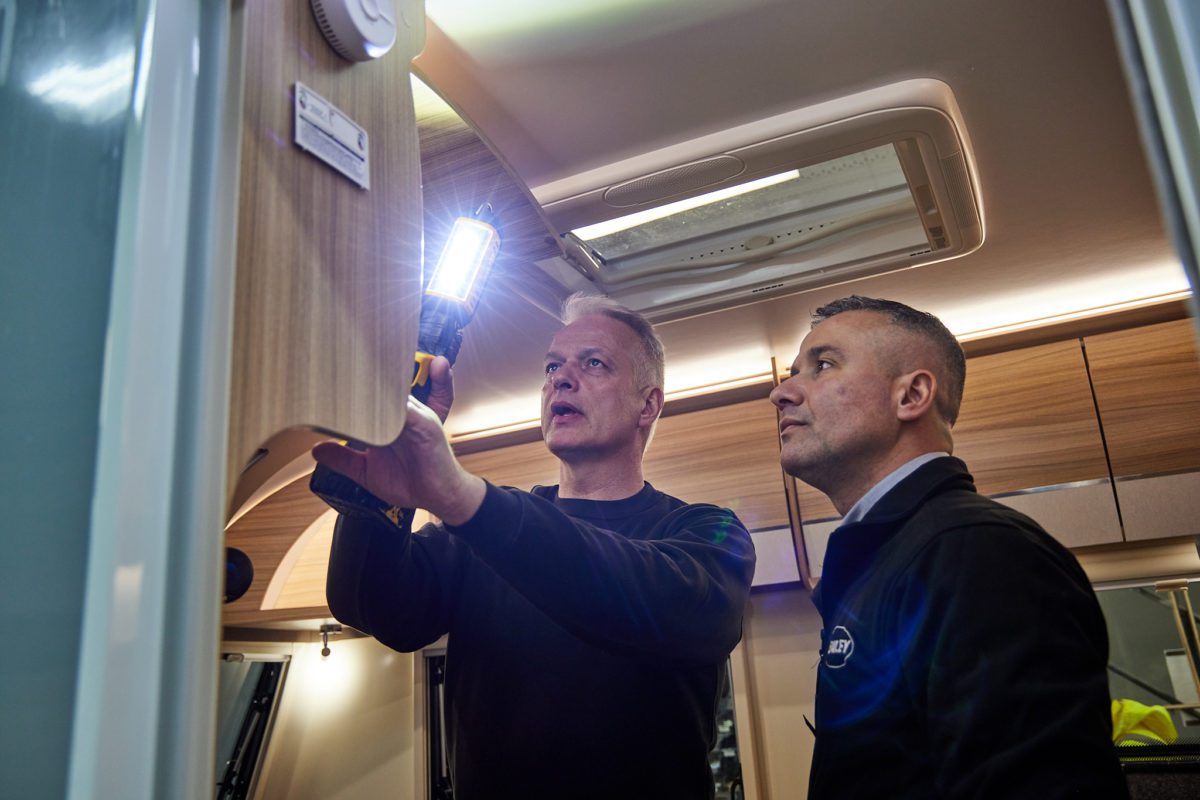 As I moved to the final station, I noticed a clearly out of kilter graphic. A jig is used to draw a chinagraph pencil line for each decal, with the offending item being an easy 5mm out from top to toe. Craig, the chap who delivered a coffee to my caravan at 06:30 that morning, looked at the Quality Control screen with interest, raising a finger to the warning notice that included my name. Looking over his shoulder, I read: ‘Lee Davey – Graphic’ before he asked about my shoddy application. You can undoubtedly see what’s coming, but at the time, I genuinely believed a mix-up was to blame and only spotted the corners of his mouth creep upwards as I reached for photographic evidence on my phone. There’s a price to pay for hand-delivered coffee, and I had fallen hook, line and sinker. 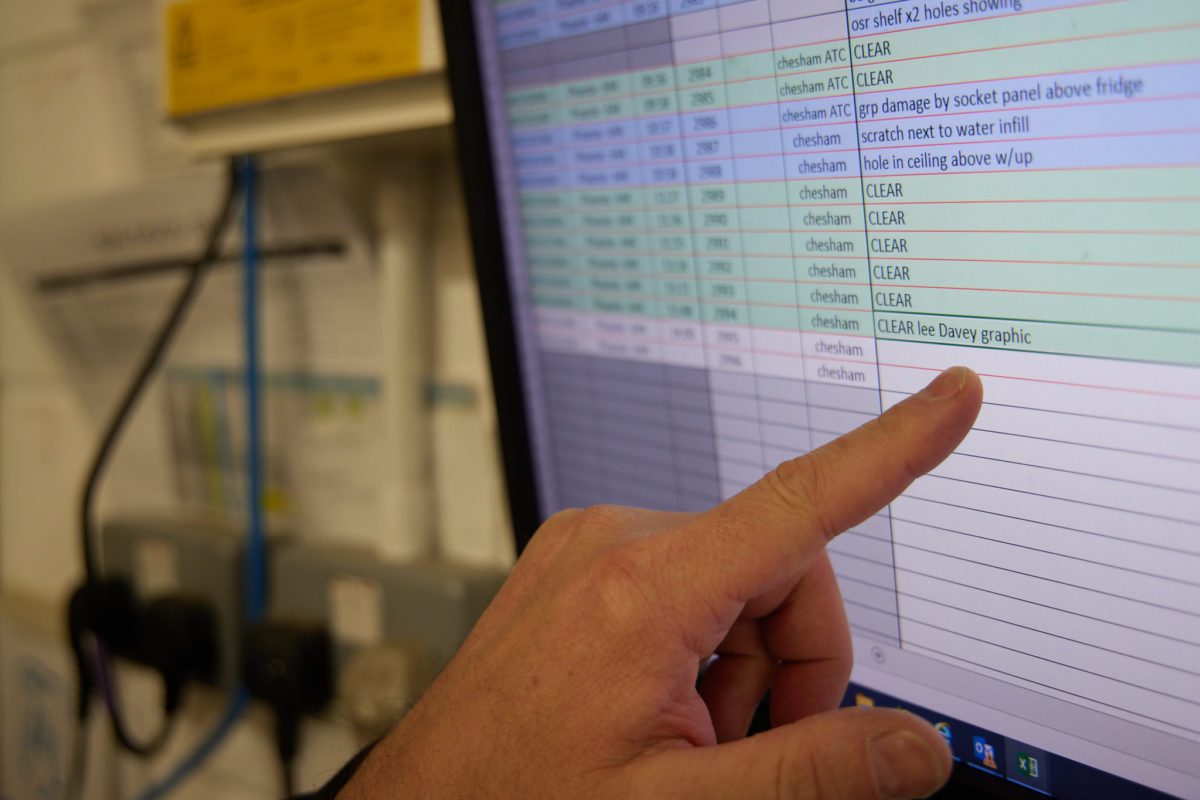 I’d like to thank the entire Bailey team for looking after me that day, from the HR team who gave me the goodie bag that each new employee receives, to the production line staff, who were incredibly courteous despite my shortcomings. The day’s target was twenty-five Phoenix+ 644’s and I’m pleased to say that all twenty-five were produced and are safely on the way to their new owners. Happy caravanning.

Building a Bailey, Part One 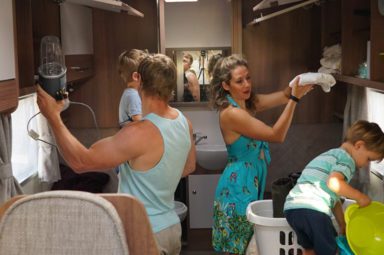 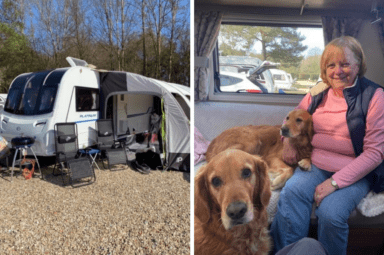 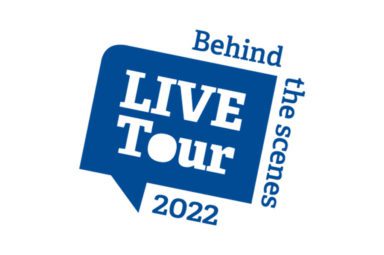 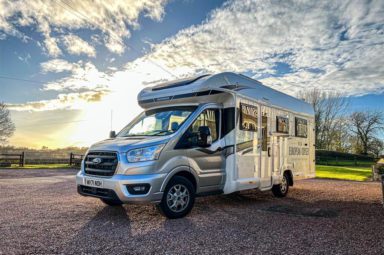 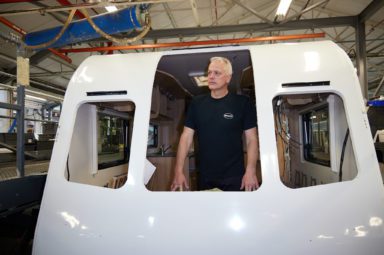 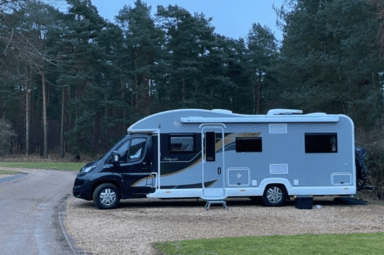 Read more
We use cookies to ensure that we give you the best experience on our website. If you continue to use this site we will assume that you are happy with it.Agree