An extraordinary experience in a Bailey Pursuit at Focus 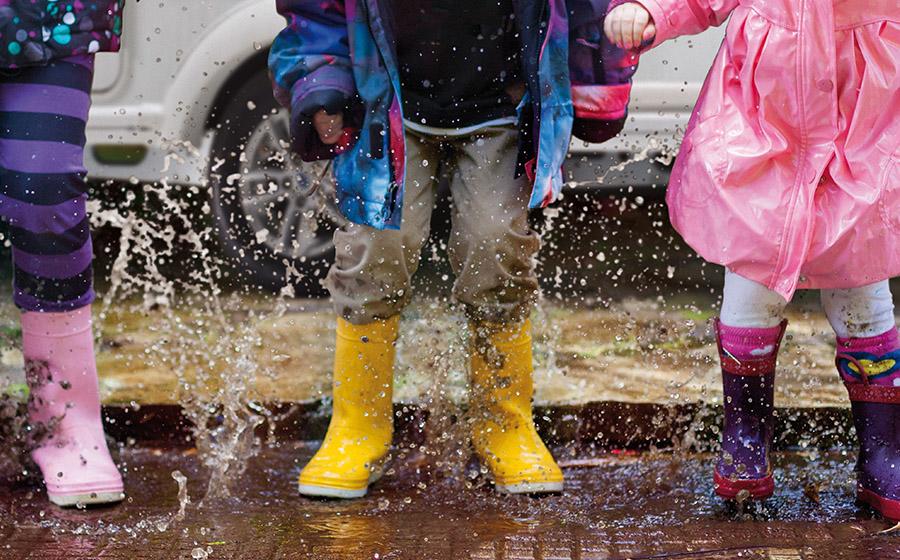 Turning up to a huge open field campsite, we spotted the new Pursuit 550-4 glistening in the sunshine, and were immediately impressed… the generous proportions and styling setting this apart from a host of other caravans sited nearby.

This was the start of the Focus festival, and we, on behalf of the charity we run had been asked to speak at the event. Bailey of Bristol had kindly provided the caravan for the week, and had even delivered it to the site, making arrival and set-up an easy process for us.

Now for those of you who are not acquainted with the 550-4, this is a 4-berth van, with a good size lounge/dining area which converts to a big and comfortable double bed, twin beds, a compact but functional kitchen, and a generous shower room with sink, toilet and wardrobe… perfect for our family of 4. 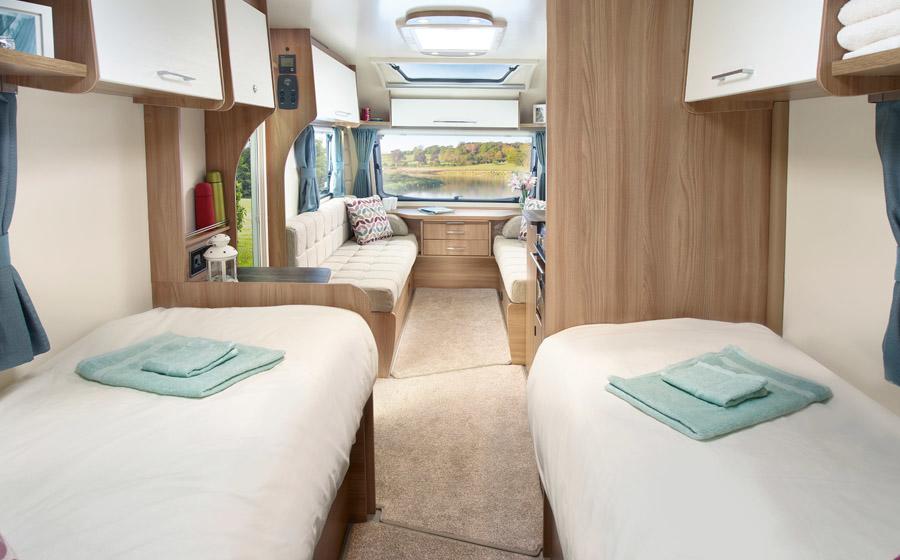 As it turned out, the position it had been sited was not quite right, but with the help of a few other festival-goers and 2-minutes of arm power, it was quickly and easily re-positioned. Five minutes later the legs were down, it was all level, and ready to use. Bailey had also provided a Prima Deluxe Air Awning 390 from Prima Leisure for use with the 550-4, a helpful addition adding useful living space for our stay.

Now the awning is best erected by 2 people, but I had to do this on my own, a task that slightly concerned me having never done it before, but I should not have been worried. As soon as it was attached, the easy to inflate main struts and cross struts quickly went up, guy ropes went in, and in 45-minutes it was ready to use… a fact that seriously impressed the other caravan users around us.

Stowing away all of our clothes, food, bags and laptops (yes this was a work trip) was quickly done, there are cupboards and storage compartments a plenty, and it soon felt like home. 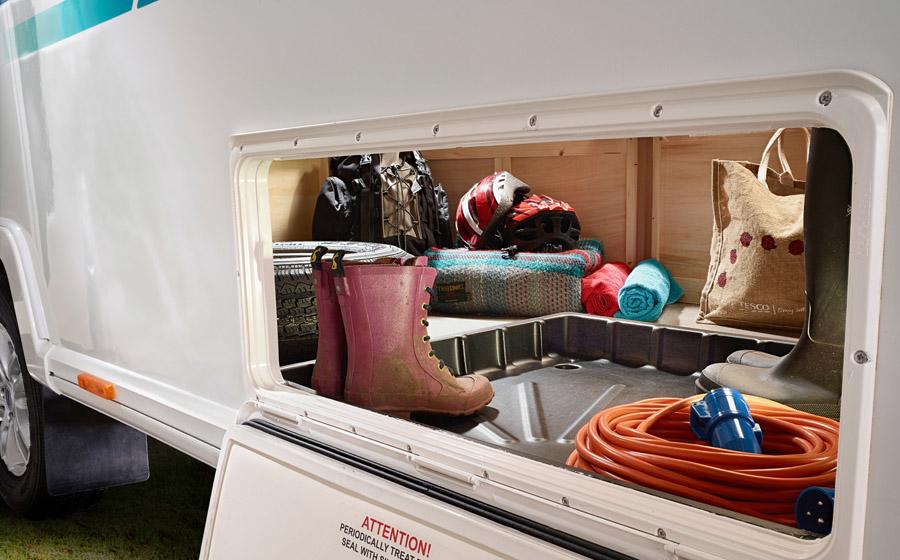 Due to the position of the pitch we did not have an electric hook-up on the site, so were using the gas to power the fridge, hot water and heating, and electrics were running off the battery. We were careful about usage, but even so we cooked and made the most of using the van throughout the week without needing to get more gas or switch to the 2nd battery (Bailey had made sure there were two!)

The weather during the week was changeable, to say the least, but we enjoyed some beautiful sunshine, and comfortably endured some heavy storms, barely noticing strong winds and torrential downpours in the caravan. The awning struggled a bit with the weather, with some of the struts bucking under the weight of pooling water, but with a few pumps into the struts and some re-positioning of guy ropes, all was back to normal.

Over the course of the week, the caravan coped brilliantly with our busy lives. There was always enough room for the four of us, in fact when friends stopped by, and numbers swelled to nine, there was always enough space, and the 550-4 never felt overloaded, something many caravans could not boast. 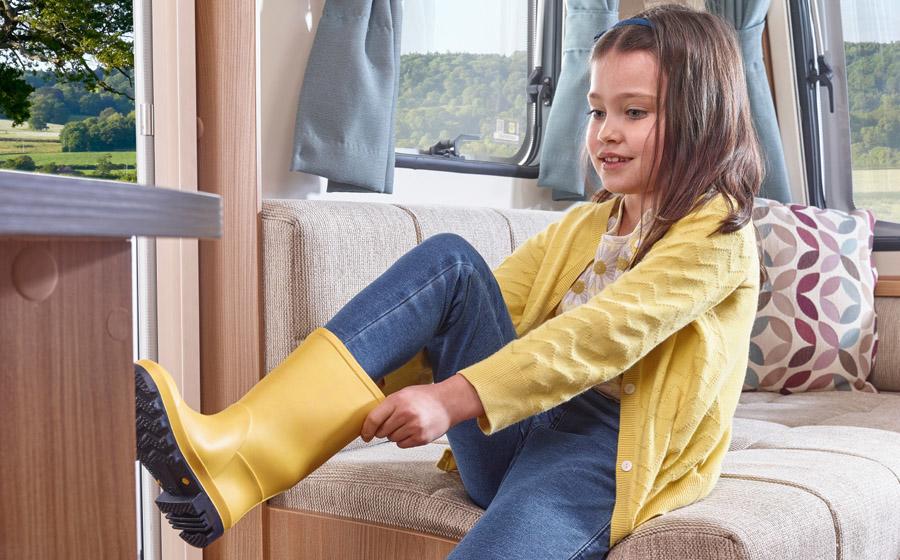 So as the festival ended, my children waved, tears in eyes at the caravan, as it rolled off the site… (being pulled by a Freelander, not literally rolling away) We had come through the week, the rain, the mud, the sunshine, with many happy memories, many new friends, and a love for the 550-4, which my wife now wants to own! 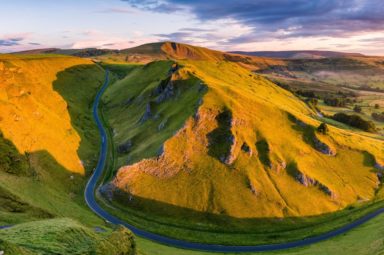 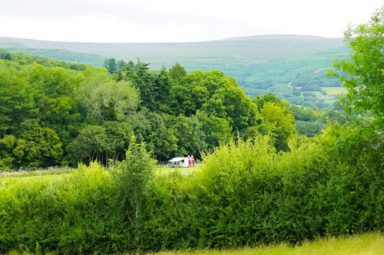 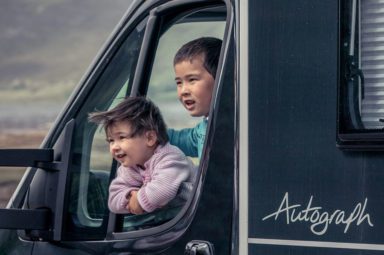 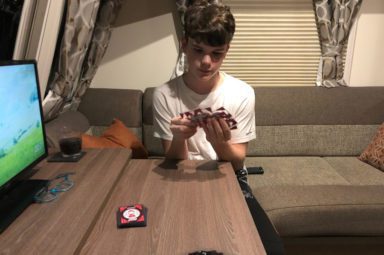 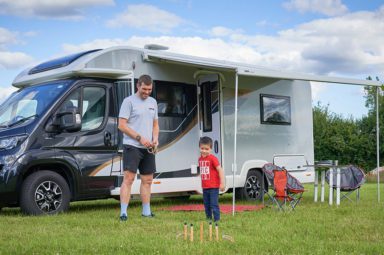 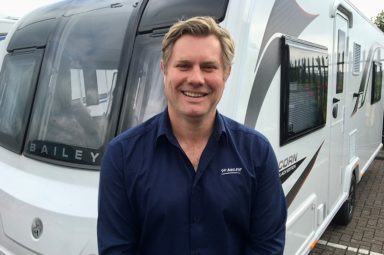